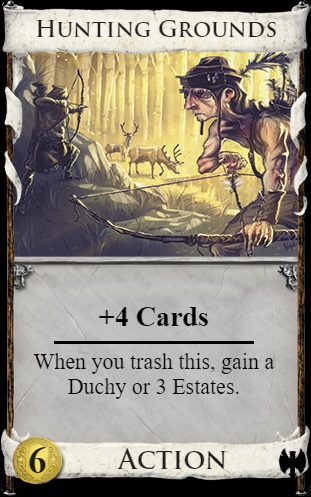 Hunting Grounds and Lurker combine to form a strategy that is extremely fast to end the game, and scores enough points that it’s extremely difficult to compete with. The synergy between these cards is so strong that there is usually no counterplay or support available that actually makes a difference.

This combo/rush ends the game reliably by turn 11 with 27-33 points. The game usually ends on a 3-pile with Hunting Grounds, Lurker, and Duchy; but sometimes you’ll empty Estates instead of Duchies if the Hunting Grounds are contested. It’s extremely difficult to compete with something that ends the game so quickly while scoring this many points, so whenever you see these two cards, you’ll be pretty safe just going for this combo deck and ignoring whatever else is going on.

I’ve only found two cards that can actually support this combo:

Catacombs: On turns 3 and 4, your Lurker plays can go towards trashing a Catacombs and gaining more Lurkers instead of directly trashing Hunting Grounds. If your opening Lurkers don’t miss the shuffle and you’re uncontested, this can speed up the end of the game by 1-2 turns.

Stonemason: You can open with three Lurkers by using Stonemason’s overpay ability, which helps out a bit. Trashing Coppers with Stonemason can be nice, but don’t do this over buying another Lurker, and don’t attempt to gain Hunting Grounds from the trash in hopes of trashing it to a Stonemason.

While other combo decks have room for other kingdom cards to give some optimization, even extremely strong cards like Donate don’t tend to matter much when compared to Lurker/Hunting Grounds.

When uncontested, the combo wins games because it ends the game extremely quickly, so that should be your focus. When mirrored, you are faced with a reality of this combo deck: it is hard-capped in the number of points it can score. Getting more points, particularly winning the “Duchy Split” is usually what decides these games.

“Duchy split” is in quotes, because the main way of scoring points is by trashing Hunting Grounds. The way to get more points is to trash more Hunting Grounds, plus buying up to 2 Estates after you have 4 Lurkers (provided you feel like you’re not sacrificing the Trashing-Hunting-Grounds-split to do so).

The other forms of interaction you care about in mirrors are Action-Victory cards. Nobles, Mill, and especially Distant Lands end up mattering a lot. Never leave these cards in the trash under any circumstances.

The presence of Pasture (Shepherd’s Heirloom) will cause you to prefer the 3 Estates over the Duchy when trashing a Hunting Grounds.

There are a few forms of counterplay to the combo, but let me be clear: they are just a drop in a bucket of what you’ll need to compete against the combo deck without going for it yourself.

Contesting Hunting Grounds: If you can get 3 or more Hunting Grounds before the combo player empties the Duchies, you can force them to aim towards emptying Estates instead. The combo player can easily see this coming and play around it — you usually don’t slow them down by doing this, but you can decrease the number of points they can score.

Attacks: they do pretty much nothing against Lurker/Hunting Grounds. Sure, cursing is probably better than not cursing against the combo, but don’t expect to get very much out of it.
The main exception to this is Enchantress. If you open with two Enchantresses and focus on having an Enchantress in play on most turns, you can expect to slow your opponent down by a turn or two, meaning that you’re looking at trying to get 4-5 Provinces by turn 12 while needing to play an Enchantress on most turns.