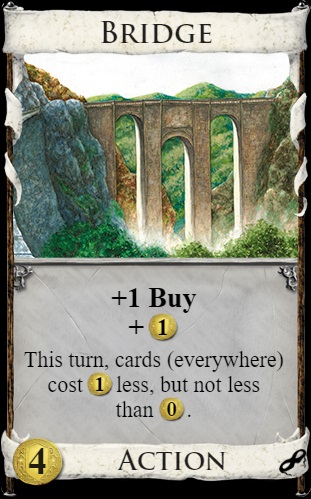 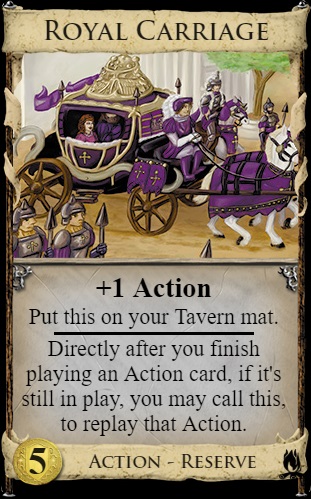 When Bridge and Royal Carriage are in the kingdom, you should always consider the possibility of going for the “combo build”. With only these two cards, it’s possible to build a deck that empties Provinces around turn 12-15*. In some cases, you may be better served by going directly for a “combo build” rather than trying to build a more generally good deck that trashes or draws, and doesn’t build for a megaturn.

Once you have 6 Royal Carriages in your deck, you will inevitably have a turn where you can get all of the Provinces. Get all of your Carriages onto the Tavern mat as quickly as possible, and along the way you’ll want to pick up a second Bridge. It’s OK to get more Carriages if they’re available, but make sure not to call any until your megaturn. Beyond the second Bridge, you usually don’t want to buy more cards other than cantrips, sifters, and possibly a third Bridge. If you know you won’t shuffle before the end of the game, you can get some Victory cards as well.

Eventually you’ll find yourself with a Bridge in hand and at least 6 Carriages on your mat. Play the Bridge, replay it with all of your Carriages, and empty the Provinces.

*The turn benchmarks given here are best-case scenarios for the combo deck. It’s possible that you can have very bad draws, which can delay you by several turns, just from not hitting $5 enough.

It’s absolutely critical that the deck described above gets six Royal Carriages. Without six Carriages, the deck can’t threaten to win the game, so the focus of most counterplay and the measure of its success is preventing the combo player from getting enough Carriages.

Royal Carriage is a good card in just about any deck, so denying them to your opponent has its perks for you as well.The tough part is that the combo player can get 5-6 Carriages pretty quickly, so just outracing them usually doesn’t work well. We want to find ways to slow them down.

Fortunately, just about every attack in the game slows down the combo deck in a significant way. Discard attacks severely hurt their ability to hit $5 often, junking attacks are brutal, and even the weaker attacks like trashing attacks are still devastating when you manage to connect with a single Royal Carriage. In the presence of just about any attack that can be played early on, the combo deck needs to invest in building more in order to deal with them, and while the focus of the game usually still revolves around winning the Royal Carriage split, attacks shift the game’s focus away from the combo and toward other interactions in the kingdom.

Most types of support will improve the combo deck when uncontested, but when Royal Carriages are being contested, especially in a mirror, a lot of the support you would use comes at the cost of getting more Carriages ASAP. When attacks are around, support (including the attacks) becomes a lot more important.

The strongest type of support for this combo deck are cards like Warehouse, which help you get your Carriages on the mat more quickly and increase your consistency with hitting $5. You’ll still want to open with a Silver but then get these cards over Silver later on. The next strongest form of support is trashing, especially those costing less than $5. Other sub-$5 non-terminals like Peddler, Caravan, and other cantrips can help a bit.

Gainers are usually a bit weaker, because you really want to be gaining Royal Carriages with them, but there are a few exceptions: Vampire, Alms, and Talisman are reasonable support, as well as things like Altar if you’re lucky enough to hit $6 early enough for it.

If you open with a 5/2, you’re looking for good trashing, gaining, and economy cards at those price points, as they are often better than just opening Royal Carriage/nothing and being sad about it.

In the presence of most attacks, you’ll want to go for them as mentioned before, and frequently this causes you to move away from the combo build. In either case, getting 6 Royal Carriages is usually game-decisive because you just can’t do anything when you only have access to four of them.

The interesting part about being mirrored is when the Royal Carriages are split 5 each. You still want to have a megaturn, but it’s unlikely that your megaturn will end the game — you usually end up buying 4 Provinces and 2 Duchies, and the game can come down to other VP you can buy on your other turns. If you’re lucky enough to find $4 in addition to your Bridge on your big turn and kick off before your opponent, you can get 5 Provinces and pretty much lock the game up.

Getting more than 3 Silvers in this case is great for increasing the chances at a 5-Province turn, and other sources of non-terminal +Buy or cost reduction works well for this situation as well. Aside from that, you would prefer to have your megaturn first so you can just go hard for green afterwards.